After 3 years of research and development Seven Seas Yachts has created a new revolutionary yacht series that delivers unprecedented levels of performance, efficiency and seaworthiness. The yachts are based on our patented Amfihull®, on their sleek design which features an ultra-low profile and on engineering innovations such as our patented EDS® driveline system. The combination of all these gave birth to a legendary series of yachts: The Legend 54, the S56 Open and the Legend 56 Fly.

A lot of research has been directed towards developing the perfect hull for our yachts. Our main concern was achieving the best performance from the hull regarding its efficiency and seaworthiness while at the same time it had to be strikingly beautiful. We were successful at all counts. The hull’s performance characteristics are truly staggering. First of all it has a very low drag resistance which allows the use of smaller engines than similar sized boats while still being faster than its competitors. It features a really steep entry cutting the waves with an entry angle of 72 degrees that in combination with the rest of the hull, ensures a very soft ride with no pounding as the boat cuts through the waves. Furthermore the boats maintain at all cruising speeds very low trim angles between 2 and 2,8 degrees. Unlike other motor boats, there is no specific speed at which they transition to plane. Instead as the speed increases, they gradually come out of the water maintaining a nearly horizontal attitude at all times. In these boats there is no hump coming on plane. This means that one can cruise at any speed from as low as 5 knots up to the boat’s maximum speed.

The boats also feature tremendous stability characteristics due to their extremely low center of gravity. They are very stable when cruising and are able to recover from heeling angles as big as 98 degrees. These are numbers that can only be compared with those from sail boats.

Every yacht in the line will provide a legendary combination of effortless performance, magnificent ride, exceptional economy and ease of handling. In standard configuration, power comes from twin Volvo Penta IPS 600 producing 435HP each, while a conventional inboard installation with shaftdrives is also available. Taking for instance the Legend 54, using this power plant the boat will reach a top speed of 35 knots, a truly amazing accomplishment for its size. Reducing the throttle, it will cruise with ease at any speed with phenomenal economy. At the same time, the hull’s fine entry angle will cut through the waves giving it a very soft ride. Estimated fuel consumption is really impressive. For instance at 14 knots it will consume 30 L/h total, at 22 knots 64 L/h and at 26 knots only 88 L/h total. These figures demonstrate that the Legend has consumptions that are half and in some cases nearly one third of those of its competitors claiming the title of
"THE MOST EFFICIENT PRODUCTION YACHT IN THE WORLD”. 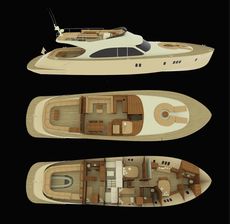