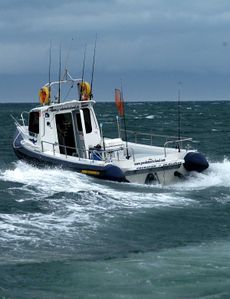 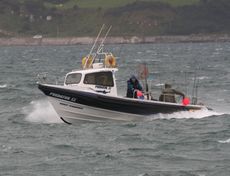 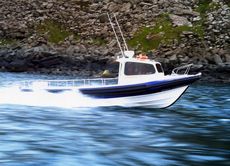 The Stormforce 9.1 by necessity is a deep V hull form, which is one of the reasons that this RIB has such fantastic abilities in rough offshore conditions. The Deep-V hull is combined with sprayrails to produce additional lift and improve the hydrodynamics of the hull. The tube is designed to sit firmly in contact with the water surface while at rest; this ensures that the RIB has maximum stability.

One of the major design features is the Hard Nose. This was developed due to several reasons, and has proven itself one of the most successful features on this design after many years in testing. The Hard Nose is primarily a safety feature. When a RIB such as this is driven hard in a large sea state, there is a real risk that detubing could occur. Thus, the nose is designed to offer complete protection to the tubes when operating in these conditions. Furthermore, there are actually two independent tubes on each side of the hull, offering even greater safety.

The other features of the hard nose are mainly from a practicality need. The GRP nose offers a much more suitable platform from which to anchor or moor, without any problems with damaging the tubes. It also offers much more internal space; this was incorporated into a large dry storage locker, and in some models facilitates twin berths.

* Safety was top of the list, the boat had to have twin diesel engines, capable of 15-20 knots on one engine
* Independent electrical and fuel system
* Large storage areas
* Well protected seating area
* The engine bay lids have been built above the tubes to prevent flooding. The bay has been designed to give access all around the twin engines.
* We built GRP tube carriers to run the length of the bay, this protects the tube in the bay and enables us to stick the tube on the outside.
* Additional storage areas within the engine bay.
ID: 3153